Could tight hips be contributing to your sore back?

You are here:
Back painJointMobility 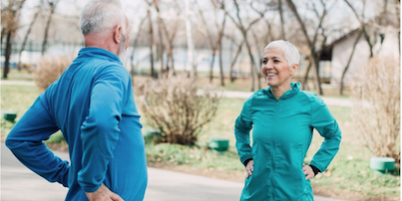 The body works as a unit that relies on the coordinated efforts of its parts to create movement. Of particular importance are the areas directly either side of the body parts that are moving. When areas that should move become stiff or alternatively, when they move too much without control, the areas either side will modify their function to compensate.

The lower back is an area that is very commonly problematic due to compensations in other areas. One of those areas is the hips. When we spend a lot of time sitting, and as we reduce the amount of time we spend in a deep squat position or getting up and down from the floor, our hips can become stiff – especially in rotation. The less they move, the more the areas either side have to move.

Many of our day to day activities involve rotation of the hips. Walking, getting in and out of a car, and even twisting to respond to someone calling your name all require the hips to rotate. Sports such as golf, tennis and bowls, and activities such as raking leaves up, weeding and shovelling all involve some rotation as well.

So how do you know if your hips are rotating well? There is an easy test you can do at home that involves standing with your feet side by side facing AWAY from a full length (or large) mirror. Keeping your feet facing forward, and turn your entire body (including your head) as far around as you can to the right. Ideally you should be able to keep your feet still, knees together as you rotate your entire body so that your left shoulder is on the right side of your body. You should also be able to see the mirror behind you.

Now repeat the same movement while seated in a chair (ie keep your feet and knees still and rotate as far as you can to the right). If you were able to move significantly further, or alternatively if you weren’t able to keep the feet still or knees together while standing and rotating, you may have stiffness in the hips. Make sure to check these movements on the left as well, as it is common to have one side that is tighter than the other.

For some simple exercises to improve the ability of the hips to rotate, click here!

Looking after the pigeon pair of your knees
March 10, 2021