While there are many causes of neck pain and tension, lets explore the relationship between an often forgotten shoulder muscle and it’s role in relation to the neck. The shoulder muscle in question is called the serratus anterior muscle – also known as the chicken wing muscle. Like most anatomical names, it its name has latin origins as it has serrated edges like a saw. The serratus anterior attaches from the cartilage of the upper and middle ribs and travels back to attach into the medial border of the shoulder blade.

The serratus anterior muscle has a number of important roles and is involved in all arm movements. It is commonly referred to as a boxers muscle as it helps to punch the arm forward. It also has a very important role in overhead arm movements, and also rib movement during breathing.

So what does all of this have to do with the neck? When we consider the chains of muscles that work together, the serratus anterior has an important role in connecting the oblique muscles of the core to the neck muscles. Like any muscles that work together, a weakness in one area will usually result in an increase in the activity of the other muscles to compensate. Unfortunately for most people, their core muscles are also lacking and hence much more tension is placed on the neck muscles to pick up the slack.

In addition to this, the serratus anterior is the most efficient muscle to rotate the shoulder blade upward – a movement that is required when we reach our arms above shoulder height. When it is weak and unable to perform this function, the upper trapezius muscle which is the big triangular muscle that spans the neck and top of the shoulder will increase it’s activity and take over this role. Unfortunately the muscle fibres of the upper trapezius are not favourably oriented for this job and hence require significantly more strain when recruited for this purpose.

So how do you know if the serratus anterior might be involved in your neck pain? There are two main factors that can give you good suspicion of its involvement. The first is when the neck pain is combined with upper shoulder tension/ pain and shoulder pain. The second is where the pain in your neck is brought on by or exacerbated by arm movements and activities that are over shoulder height.

If this is the case, adding some serratus anterior shoulder strengthening exercises to your neck exercise will have the greatest effect. A relatively simple place to start is this seated exercise where you are using your hands to lift your buttocks off the chair. Try to lift and hold for 2-3 seconds before repeating 6 times initially. Even if you are unable to lift off completely, aim to reduce the pressure on the seat. As with all exercises you should not experience any pain during the movement. 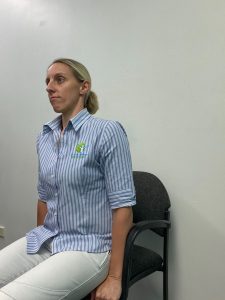 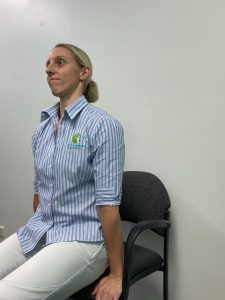